The Air-Conditioning, Heating, and Refrigeration Institute (AHRI) recently petitioned the US Department of Energy (DOE), asking them to initiate a Notice and Comment for Rulemaking to develop a new unified test procedure combining efficiency metrics for residential furnaces. At a high level, this new test procedure would combine the current gas (Annual Fuel Utilization Efficiency) AFUE, and electrical efficiency metrics (Fan Energy Rating) FER and standby, into a new unified metric AFUE2 for measuring furnace efficiency. On November 14, 2018, the DOE published a Notice of Petition for Rulemaking to consider this request. The comment period for this notice is open until January 14, 2019. As part of this petition on November 2, 2018, the DOE issued an Enforcement Policy Statement for the FER regulation, which goes into effect July 3, 2019, stating that the DOE will not enforce the testing, certification and compliance requirements while the DOE considers the request from AHRI. At this time, there is uncertainty regarding the outcome of the DOE Notice of Petition. Some possible outcomes:


Please note that NRCan recently announced they will be implementing the FER regulation as of July 3, 2019. The AHRI petition does not affect Canada’s plans to implement FER.

Starting July 03/2019 sale of furnaces equipped with PSC type blower motor will stop in Canada. Follwoing is a FAQ in regards to NRCAN new regulations.

The Fan Efficiency Rating (“FER”) is a regulation passed by the NRCAN in 2017 that limits the power consumption (watts per cfm) of furnace fans on certain HVAC equipment.

WHAT DOES IT MEAN FOR ME?

Furnace fans, also known as blowers, that use a permanent split capacitor (PSC) motor cannot meet the power consumption requirement. Therefore, after July 3, 2019, furnaces may only be manufactured with an electronically commutated motor (ECM), which can be either constant torque or variable speed. Inducer fans are not covered under the regulation.

WHICH PRODUCTS ARE IMPACTED?

All furnaces (gas, oil and electric), modular blowers (with and without electric heat), and gas-fired residential package units.

CAN I PURCHASE A FURNACE OR PACKAGE UNIT WITH A PSC MOTOR AFTER JULY 3,2019?

Yes, there is no restriction on purchasing or installing equipment with a PSC motor that was built before July 3, 2019.

WHAT HAPPENS IF I HAVE A WARRANTY CLAIM FOR A PSC MOTOR?

PSC motors will still be available for warranty replacements and non-warranty repairs.

Update to Enbridge home conservation program effective November 01-2018. There is reduction in the amount of incentives and audit cost. 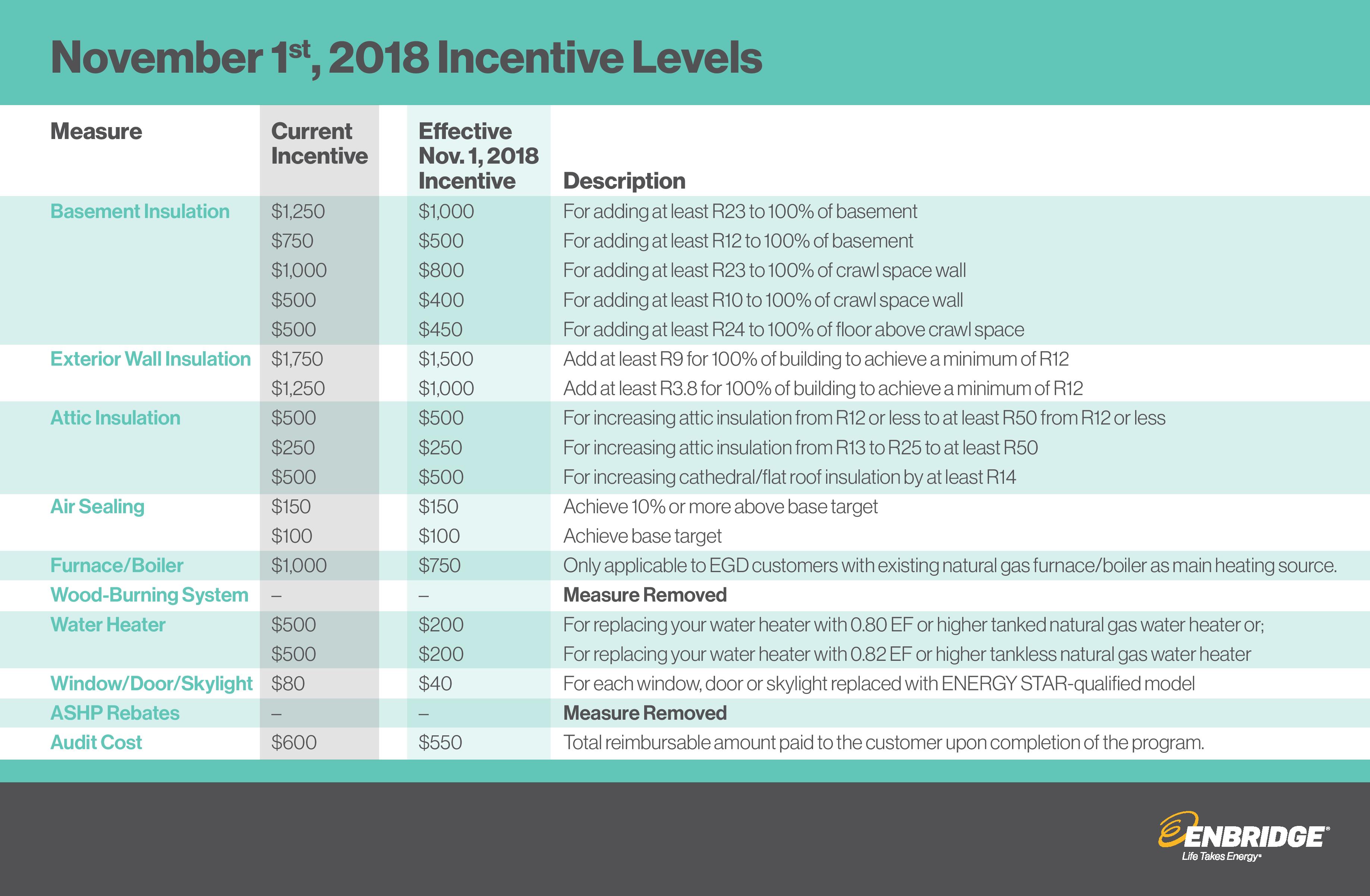 To no one’s surprise, only months after cancelling hundreds of renewable energy contracts, the Ontario government introduced legislation late in September that will scrap the Green Energy Act, a law introduced in 2009 that aimed to bolster the province’s green energy industry. Critics of the act have said it resulted in an increase in electricity costs and saw the province overpay for power it did not need. Infrastructure Minister, Monte McNaughton stated last week that repealing the law will ensure that municipalities regain planning authority over renewable projects, something that was removed under the act.

The government said future renewable energy projects must first demonstrate need for the electricity they generate, before being granted approval. The province would not say if the same rules would apply to natural gas or nuclear projects.The government announced this summer it was cancelling 758 renewable energy contracts in what it called an effort to reduce electricity bills in the province. Energy Minister, Greg Rickford said the move would save provincial ratepayers $790-million, but according to a CBC report, “industry officials questioned the figure and predicted there would be job losses.”

“Environmental advocacy groups and opposition parties said eliminating the Green Energy Act is largely symbolic, since the contracts were already ripped up. But they argued the move would discourage those in the green energy industry, costing the province significant investments and jobs without lowering electricity bills.”

“It is largely symbolic, there’s no current investment going forward in green energy, there are no projects to cancel,” said NDP legislator, Peter Tabuns, adding the Tory plan “doesn’t actually address the substantial problems that people have with higher bills.”

Green Party Leader, Mike Schreiner said the legislation will do nothing to lower electricity prices, “but it will have a chilling effect on job creation and investors in the clean economy.”

Why Dirt Streaking Occurs Around Vents 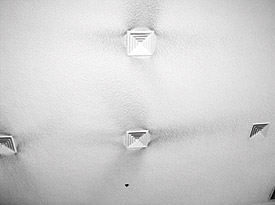 To keep it simple, I am using “vent” as a generic term to cover all the varieties of terminal devices that could cover a supply branch outlet. Vents are really broken down into the three categories of diffusers, grilles, and registers. Each of these has its own characteristics and definitions that I won’t get into in this article.

A Call for Help — We Have Streaks

My first run-in with dirt streaks occurred about 10 years ago. We received a call to examine dirt streaking on an expensive ceiling. The building was approximately two years old, and the original HVAC company could not determine what was causing the issue. The contractor’s technicians added 1-inch pleated filters in an attempt to better filter the air and solve the problem with no luck.

The HVAC system was equipped with four-way diffusers, which left a nice multi-directional pattern of dirt streaks coming out of the edges. Due to the style of the ceiling and the purposes the building was used for, this issue had to be solved. It wasn’t acceptable for these dirt streaks to be running across the ceiling, as they were pretty noticeable looking up from the ground.

The original company recommended extending ducted sleeves from each diffuser to move them away from the ceiling. This would prevent the dirt streaking and allow the ceiling to be cleaned up. This must have been a good idea, as a couple of other companies made the same suggestion. The only problem with this was it would be more of an eyesore than the dirt streaking. The building owners weren’t buying this solution.

After some digging around, my suggestion for correcting the dirt streaking was a bit more simplistic. When advised they could correct this issue with a case of caulk and a caulk gun, I got a lot of odd looks. It was too simple of a repair. Once I explained what was occurring, and how the caulk could cure it, they were delighted. It was also a solution a member of their staff could easily correct, once shown how.

So, what was the source of this dirt streaking, and why would caulk fix it?

The Source of Dirt Streaking

One of the main contributors to dirt streaking is the turbulence of the conditioned air coming out of a supply vent. When air leaves a supply vent, it is coming out at a high velocity due to being squeezed through the louvers of the vent. This action is similar to placing your thumb over the end of a water hose to increase the distance water can spray.

These particles of dirt often come from two different sources. One common source is from within the room itself. Depending on what is occurring in the room, the duct streaking can have various contributors, such as carpeting, candles, pets, and people. These dirt contributions become entrained in the conditioned air coming out of the supply vent and stick to the surfaces the conditioned air is moving across.

Depending on the conditions of the living space, dirt streaking may be amplified when certain factors exist. For instance, excessive moisture in the room air can allow particles to develop stickiness, while a lack of moisture can cause the dirt particles to be attracted to the building surfaces. The Coanda Effect is another variable that needs to be considered here, as it has a direct influence on how well air is projected across a surface.

The first step is to determine the source of the dirt. This begins with a visual inspection of the system and the environment it is operating in. One of the first things you should do is examine the equipment and the ducts feeding the vents that have streaking issues.

If the equipment, coil, and ducts feeding the vents that have streaking issues are clean, you can eliminate filter bypass issues or duct leakage as a contributing factor to the dirt streaking. This leaves you with determining if the source of dirt is from particulate within the room itself, or if it is being brought into the room through unsealed boot penetrations.

A common cure in commercial buildings, where the dirt sources are internal, is anti-smudge rings around the vent penetration. You will see these rings on many restaurant vents as sheet metal collars that protrude down from the vent approximately 1.5 inches. These rings break up the action of the air as it exits the register and forces it downward instead of across the ceiling.

When the dirt sources are external, such as from an unconditioned space, sealing the boot penetration to prevent any gaps between the conditioned space and unconditioned space usually does the trick. This was the recommended correction for the issue of dirt streaking I mentioned previously. There were massive gaps around the boot penetrations in the ceiling of this building that were allowing attic air containing cellulose dust to be entrained and spread across the ceiling. Once the boots were sealed, the dirt streaking stopped.

Understanding air properties can make you a real rock star when it comes to solving issues associated with the buildings you service. These issues might not have anything to do with your system, but they appear to. Take a look at the building side of the duct system, and understand the cause-and-effect relationships that influence your systems and the environments they condition.